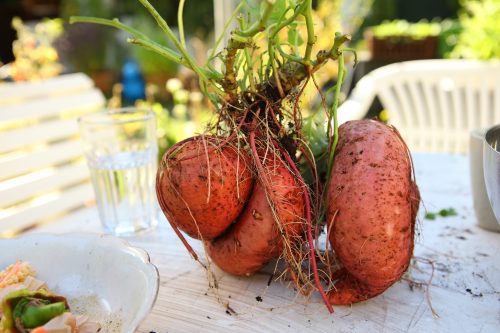 When fall arrives the sweet potato, a healthy seasonal food, rich in beta-carotene, which by at this time of year is an inseparable of its companion of the chestnut, which are both healthy.

The sweet potato is considered a very tasty potato, imported by Christopher Columbus from America, after finding it in Haiti, where it was known by the name “Potato.”

Much of the sweet potato fiber is soluble; it is a healthy food that is easy to digest and does not increase the level of glucose in the blood, nor the development of insulin resistance, which is the pre-diabetes state.

In addition, the sweet potato contains provitamin A in the form of beta-carotene, almost the same as the carrot, which is responsible for its orange color. Other vitamins that it contains are those of the B group, and on the other hand also it contains minerals like iron, copper, manganese and potassium. Proteins, although they appear moderately, contain amino acids, and are rich in one of the so-called methionine, a poor substance in the vegetable assortment.

Phenols, flavonoids and amino acids such as glutathione, are those that enhance the antioxidant effect of carotene, which prevents cataracts, certain cancers and cardiovascular disorders.

Glutathione helps eliminate free radicals and harmful substances such as cadmium, paracetamol or other tobacco pollutants. In addition, this amino acid reinforces the effect of other antioxidants such as vitamins C and E.

There is a variety of sweet potato in the kitchen, which is violet and rich in anthocyanins, which are beneficial in decreasing the inflammation of rheumatoid arthritis, osteoarthritis or asthma.

For the days when we want to leave the regular potato out of our diet or combine this with a healthy, nutritious and a variety of vegetables, we can incorporate its relative: the sweet potato to enjoy its valuable properties, very in keeping with the diet of athletes, for being rich in Hydrates, essential minerals and antioxidants…

If you liked this article about a healthy seasonal food (sweet potatos), ypu can visit our blog and you will find some articles about nutrition